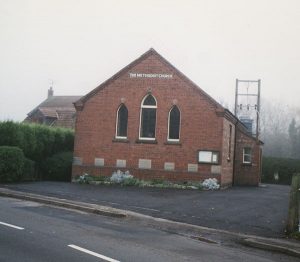 There has been a Methodist presence in Thurgarton since 1833 when a wooden building was erected on a piece of rented land at 16s 0d (80p) per year. In 1923 land was purchased on Bleasby Road for £27 on which to build a more permanent structure. By 1927 there were sufficient funds to start building the Church and a stone laying ceremony was held on the 19th May. The building work was carried out by Mr Lewin of Netherfield and cost £1134 to complete. It was dedicated on 8th Sept 1927 with 300 people in attendance.

In the past 85 years there have been many stalwarts of the Church who have kept a Methodist presence alive in the village. Many young people were also taught in the Sunday School down the years. There were 50 children on its roll in 1977 but by 1990 this had dwindled away due to a lack of young people in the village.

Since 2012 the Methodists have worshipped jointly with their Anglican friends from St Peter’s. The first 2 Sundays each month we meet at St Peter’s Church and the third and fourth Sundays at the Methodist Church. Where there is a fifth Sunday the service is held in the Methodist Church. All services start at 10.30 a.m. It is hoped this ecumenical link will keep a Christian presence alive in Thurgarton for many years to come. The dates and times of the church services are included in the village newsletter – ‘Thurgarton People’.

Thurgarton Methodist Church is used for activities other than worship and since the pews were removed provides a more flexible space which is available for suitable events.