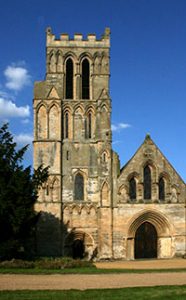 St Peter’s church is part of the Benefice of West Trent, which consists of seven parish churches, including the nearby villages of Hoveringham, Bleasby, Halloughton, Morton, Rolleston and Upton. Sunday services are held in St Peter’s church on the first and second Sunday of each month, and in Thurgarton Methodist Church on the third and fourth Sundays. The dates and times of the church services are included in the village newsletter. You can also find more information by visiting the website of The Benefice of West Trent. 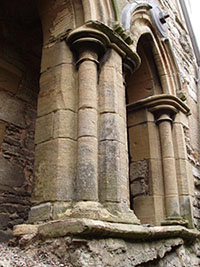 Thurgarton Priory was founded in the 12th century. Built as a priory for the Regular Canons of the Augustinian Order (later known as the Black Canons, a reference to the colour of their habits), it was dedicated to “God and St. Peter”. The Priory included monastic buildings alongside a truly impressive church building, rivalling Southwell Minster in size and magnificence.

The Dissolution of the monasteries under Henry VIII resulted in the eviction of the monks in 1538. The Priory buildings were sold to William Cooper, and remained in the Cooper family until 1825. The surrounding land was given to Trinity College, Cambridge, who retain the nominal responsibility of providing a parish priest. The buildings fell into disrepair, and it was not until 1846 that the new owner, Mr Richard Milward, restored the church to its present form, incorporating some of the ancient building. Follow the links below for more details:-

What to see in St Peter’s church

The church has an idyllic countryside setting, with the grounds of the Priory on one side, and the cricket field on another. The north tower, originally one of a pair, and the great west door remain from the original medieval priory. The west end of the medieval arcades are incorporated into the interior of the church, as is a very fine early carved stone niche, relocated during the restoration

of the building into the east window. The stone which forms the altar surface is generally accepted as one of the few surviving pre-reformation stone altars, and bears its original carved consecration crosses. Near the altar stands the carved wooden triple misericord, typical of the furniture of the priory in late monastic times. It is constructed to form a two level seat, a sitting level and another level (the front edge when raised) which allowed the occupant to take the weight off his legs whilst apparently standing. 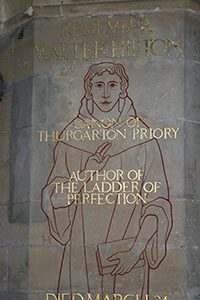 Walter Hilton, the most famous of the canons who lived at Thurgarton, is best known for writing The Ladder of Perfection, still in print over 600 years later. There is a homeliness about the book, which makes a surprisingly fresh and vigorous approach to the life of prayer and to spirituality. Walter Hilton died in 1396 on 24th March; a memorial to him created on the 600th anniversary of his death can be seen on one of the church pillars.